It has been quite a busy couple of weeks. The heat has been almost unbearable. Reaching 100*  plus on several days. The animals are holding their own but are visibly miserable. We are changing out water buckets several times a day and I have even moved the buckets closer to them by placing them under the shade trees so as to not have them go so far for a drink. Even the poor chickens are panting and holding their wings away from their body in an effort to cool themselves! Because of the heat, egg & milk production have dropped. The sheep are having difficulty with parasites, partly due to the stress from the prolonged heat wave. 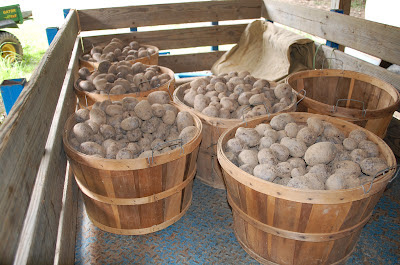 Some of the garden is starting to suffer and we have lost several pepper plants. The tomatoes look like they may all come on at once due to the heat and drought and I am afraid we will be seeing red very soon...
We have harvested all of the potatoes and this year produced an astounding 10 bushels. A small amount of garlic is left to go, but the ground is so dry we are waiting for rain to finish up. Thus far about a bushel has been dug. The second corn crop is doing well and with the promise of some rain next week it should be a good harvest. The watermelons are loaded with blooms due to the attention of my husband. These are some seeds that date back to his grandfather's garden and he wants to add these to our ever growing stash of saved seed.

A 2 day trip was made to Wilmington to get Luke partially settled for school. While away Mom and Doug kept watch over the critters and she milked. Of course our first corn crop came in on the day we were slated to leave so she and my sister pulled and froze it. They were kind enough to share the harvest with us, though I did not expect it since I did not join in the shucking game!

Posted by life on the homestead at 1:15 PM