Well the duck that beat me up finally hatched her babies. 5 cute fuzzy ducklings are wandering around the chicken coop. 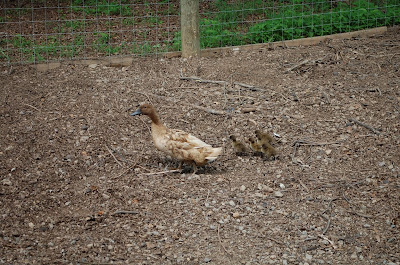 Mom and babies are doing well and with extra help from Uncle Ed, the goose, who is keeping a very close eye out on them all should be well! 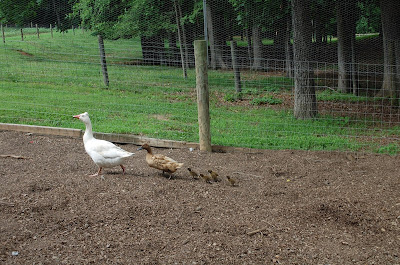 Posted by life on the homestead at 12:03 PM No comments:

Sometimes you just have to do things yourself. I have been patiently waiting (well not really) for hubby to help me get my medicinal herb bed built. Several weeks back I bought a bunch of herbs and have been having to keep them watered. I had picked up the corner block already but needed the boards. After several nights of him skipping Lowe's I made the decision I would do it myself. Now, I have never gone and bought lumber alone, always with hubby. I have watched how he looks down the board and makes sure it it nice and straight. I had this. Off I went. Wouldn't you know what I needed was way back under the shelf. I was climbing up under and had found 3 nice straight ones when a kind young man took pity on me and asked to help. I paid for my boards and proudly loaded them up, once again all by myself!
To construct the bed I needed 2 boards cut in half. Well after my lumber run I was feeling pretty confident and said to self, Self you have watched hubby use his skill saw for years, you can do it! Once home I drug out the drop cords, saw horses and skill saw. Amazingly, I cut both boards exactly right and did so without loosing any body parts!
I put all his stuff up, exactly how I found it and headed to the garden to construct my bed.

I put down weed block under the bed to hopefully keep out some of the grass. Ta-da! Here is the finished product. 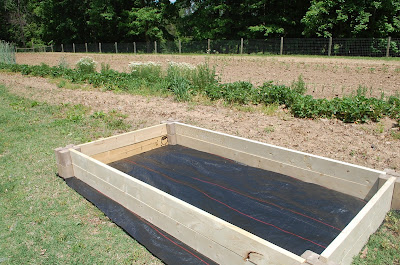 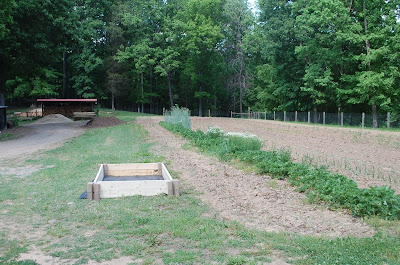 To his credit he did help me level one corner and put 2 scoops of topsoil in it with the tractor which saved me a lot of backbreaking work. This is the finished bed, planted and mulched, 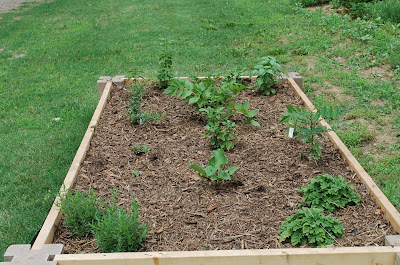 I plan to build several more along the side of the garden. One for culinary herbs and 2 or 3 for new asparagus beds.

Posted by life on the homestead at 3:27 PM No comments: 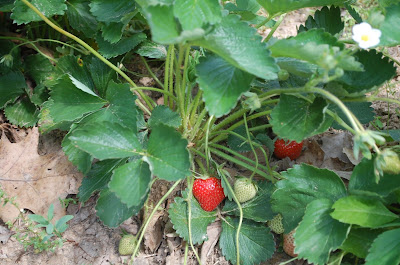 The strawberries have produced their little hearts out this year! We have eaten all we could hold. I have made jam, have given away several gallons to family and today made some strawberry syrup.
I must say it turned out divine! 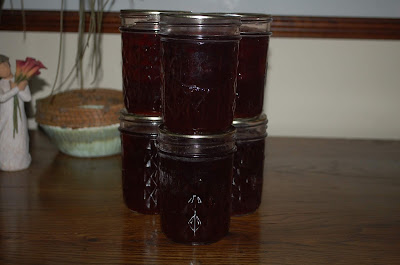 Pancakes are on the menu for Sunday breakfast!

Posted by life on the homestead at 2:53 PM No comments: 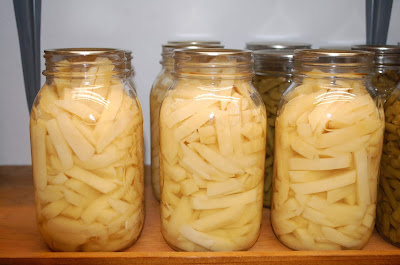 I have been wanting to haul out the canners and get busy filling the pantry. I have already canned several quarts of stock and today I canned french fries!
Now why you may ask would someone want to can french fries? Well when I crave ketchup my fries are only a few minutes away! Drain them, place on a greased pan and bake. No peeling, no mess and a craving satisfied!!
They turned out really pretty. I did hot pack them but I think next time I'll forgo that step and cold pack. It would save a lot of time. Yum-o!

Posted by life on the homestead at 2:47 PM No comments:

The chamomile is ready to pick. This was actually a surprise crop since I did not plant it this year. I planted a lot last year that we had started from seed but the hot dry weather killed it (or so I thought!) This spring it came up like crazy beside the strawberries and I was thrilled! 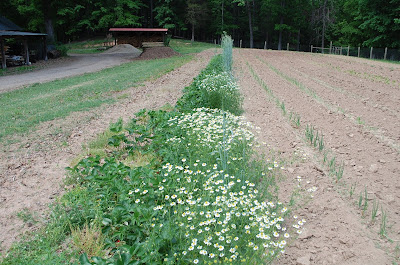 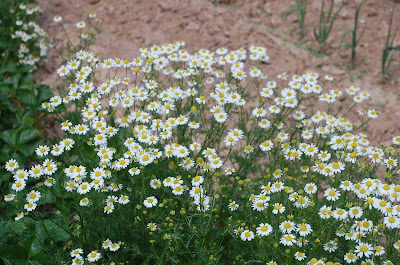 I harvested the better part of a colander full and put them on dehydrator sheets. I won't dehydrate but just leave them in a dark place for a while to completely dry and then i will jar up for a nice hot tea this winter. 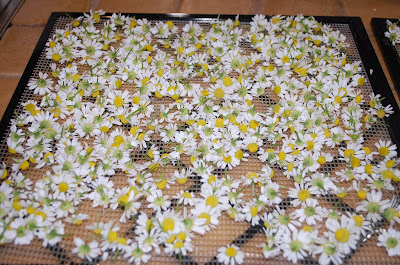 Posted by life on the homestead at 2:31 PM No comments:

A few catch up posts! 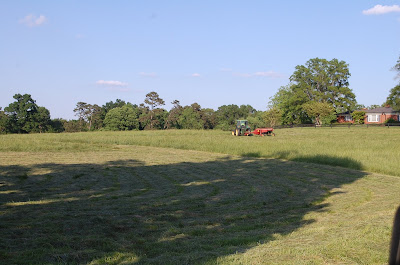 We dropped our fescue field today. Looks like it will be a good cutting. Last year this field produced 600 bales the first cut. We will see! 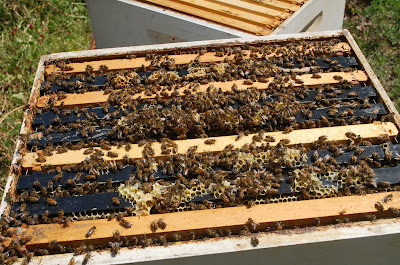 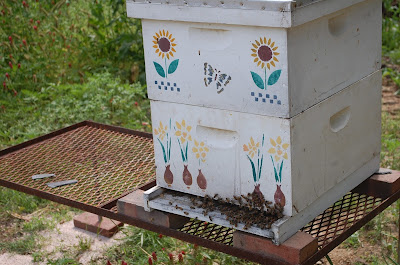 The bees have been here almost a week. I wanted to peek and see how they were settling in. To my surprise they had already built out all the frames in the brood box and I had to add another. Very happy bees indeed!
Posted by life on the homestead at 2:23 PM No comments:

My phone rang all day long on Monday. It is truly spring time on the farm. I had people that wanted to stop by for eggs and soap. My bees were ready for pick up. Coop was coming in Tuesday night. Two dog training sessions were scheduled. My shearer called and wanted to come Friday. Throw in a haircut and errands. By Monday night I felt like Goldie Hawn on Overboard. Buh, buh, buh.....

So it went like this..
Monday I kept my calender and pen by my side and penciled in as the calls came. I  finished packaging up a few more items for dry storage. Made a quick grocery store run. Had a young fella with a troubled past who is now on the road to a great life want to pop in and fish. ( had to visit a little and enjoy his accomplishments!) Fed animals, milked goats, harvested broccoli and watered plants.

Tuesday- Cleaned the house early and headed out for dog training. This is a 3 hour affair. An hour drive each way and and hour training. I had a guy scheduled to come out at 2 to repair the ice maker in the fridge but he canceled on the way home for training. Once home, mowed grass, fed animals, milked and scampered off to pick up coop order. The traffic was awful and it took 2 1/2 hours just to make that run. Should have been a little over an hour. Sigh... and then the question from hubs..what's for dinner.

Wednesday- I was supposed to meet a friend to help with some personal issues but she canceled so I rescheduled a later day hay pick up for the morning. We got her loaded up and I grabbed a quick shower. Then I was off to Home Depot to buy some really cool corner blocks to construct some raised beds. Then on to haircut.. it was now 3:30 and time to milk, feed and Yep! water plants.

Thursday- Laundry, cleaning and off for dog training again. I had to make a stop on the way home and pick up yet another coop order. Wouldn't you know the fridge guy called on my way home and wanted to come out. Lausy mercy. Sure what the heck. Got him gone, fed critters, milked, fed hubby and went to pick up my bees. Checked my email and the pool people wanted to come in the morning to fix the pump that lightning hit 2 years ago! Why not. 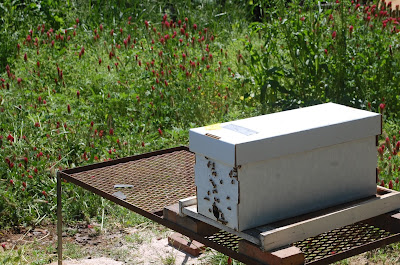 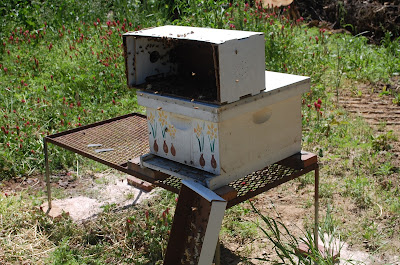 That brings us to today. Up early to corral the sheep in the barn. Two good friends arrived to help with shearing. It will be a girl power day with no guys around to help with holding the rams. It went extremely smoothly and we were done by 12:30. Everyone headed out, I grabbed a snack and bee gear. I just finished getting them both established and the swarm hive checked when my phone pinged and the girl texted she had arrived to swap out pigs. The one we sold her hadn't bred and we were replacing her. One pig off, one pig on and I was off to the hay field. I was convinced there was only going to be 35 or so bales of the clover hay. Try 98. My son, hubby and I got them loaded and in the barn. By now is was 6:30. and I was pooped. Next on the list? Food and sleep!

And there ya have it! A look at a week here on the homestead. If it sounds like I'm complaining I'm not! We are blessed beyond measure and I am grateful to be able to live this life. As crazy as it may be!
Posted by life on the homestead at 6:13 AM No comments: