Of Course She Would 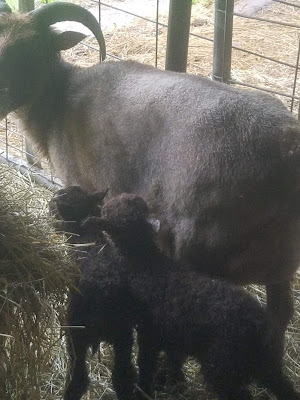 Yep in the middle of the pouring down rain that has not let up all day our first Icelandic lambs were born. Thankfully mama had sense enough to bring them up to the barn. She was in no mood for newborn photos however. 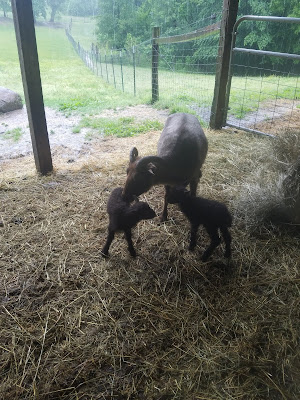 A set of solid moorit lambs, 1 ewe and 1 ram.
Posted by life on the homestead at 2:29 PM No comments:

Oh and the rain has arrived. It poured all night long and has not let up today. Looks like afternoon chores will soggy for sure.
Today I needed to can some beef bone broth that I cooked in my roaster for several days. I had strained it well and put in the fridge to let the fat separate. When I started skimming I knew I could not toss all that glorious fat. It was so rich and lovely looking. Once the broth was in the canner I did a lazy version of rendering the beef fat or tallow. I melted it and let all the particles fall to the bottom and strained it as I ladled hot fat into hot jars and lids. I got 3 quarts of broth and 4, 1/2 pint jars of tallow. 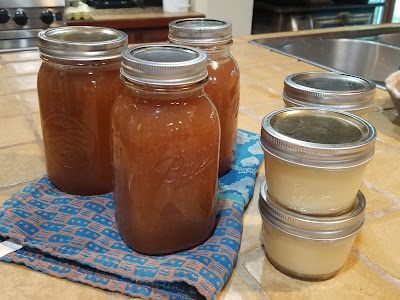 I plan to have some country fried cube steak using this very soon. Yum.
Other preserving this morning was a batch of strawberry jam and 4 quarts capped and frozen for later use.

Posted by life on the homestead at 2:30 PM No comments:

Today I spent a lot of time preparing for the upcoming rain. I opened up the barn so all of the animals would have ample space to move around since no sheep or goat in their right mind would stand out in the rain and the overhang would probably get a bit crowded! I scattered extra hay buckets to fill tomorrow and hope that everyone plays nice. 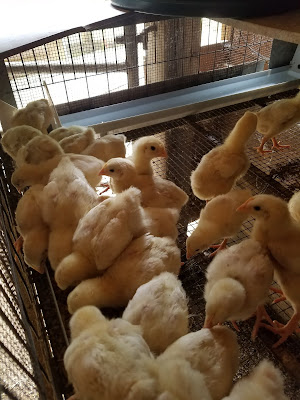 I also moved the second round of meat birds to the brooder. It has been so cool and windy I wanted them to have a little age on them before going out.

Late in the afternoon I was able to snap a couple of pics of the Canadian Goose babies that hatched a few weeks ago. We have a love hate relationship with them but it has been fun watching them grow. In all the years we have been here (29) we have not had any nest on our pond. 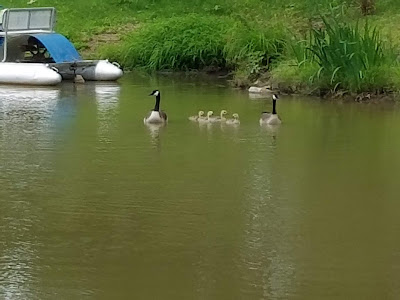 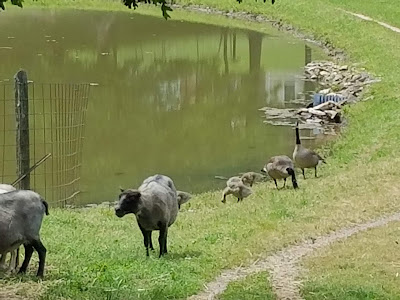 Every afternoon they bring the babies up to the barn to clean up any feed the goats have left.
Once the babies feather out and are big enough, I plan to let them know their lease is up and they need to move on!
Late that evening Hubby and I tag teamed the new orchard getting it mowed and trimmed before the rains came. However, the rains came early and we both got soaked. The orchard is settling in nicely and we even picked a handful of blueberries! 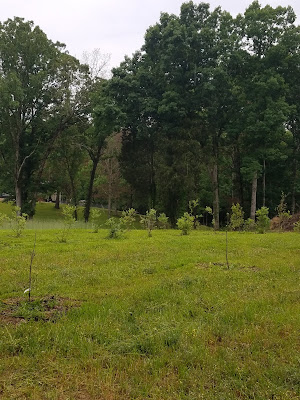 Posted by life on the homestead at 1:44 PM No comments: 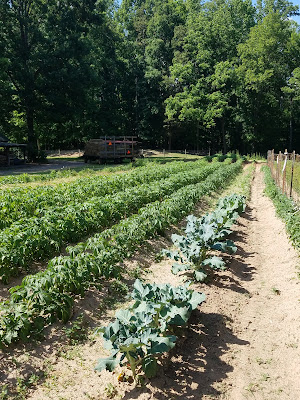 Next week the weather forecast is calling for 5-8 inches of rain. The spring has been so crazy with weather ups and downs we are behind in the garden. This was a must get her in kind of weekend.
Our original plan had been to plow in the rye cover crop in the upper field garden but we decided to hold off thinking it will probably dry quicker untouched. The old garden as we call it was our main focus this weekend.
First on the list was to stake and tie up tomatoes. We have 75 planted for our first crop. We will be starting more for the upper field garden for a later and continuous harvest.
Hubby mowed down the fall kale and the last of the chamomile to make room for peppers. We planted 61 various varieties. We will also be planting more in the upper garden as well. Our green beans are up but were a bit spotty in germinating, so I filled in between with more seeds. I planted a few turnips. We also planted okra, cucumbers and several kinds of squash. The rest of our time was spent weeding strawberries and cultivating between the rows. 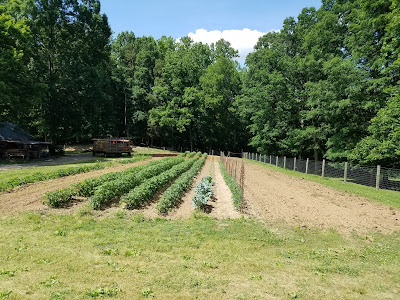 We picked another 2 gallons of strawberries and broccoli. 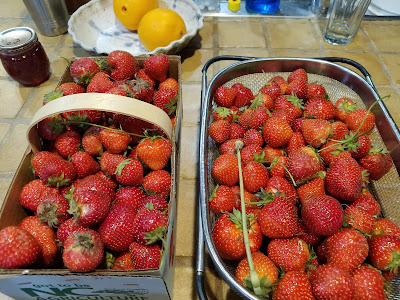 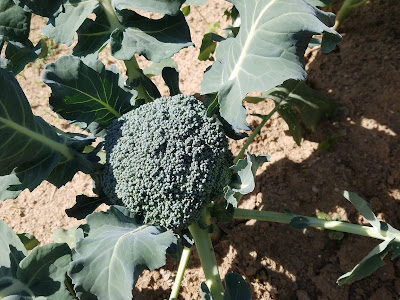 Busy weekend and got a lot done. Garden looks lovely don't you think? ;-)

Posted by life on the homestead at 8:43 AM No comments:

On Monday we mowed another hay field. This week was supposed to be cool but clear and sunny with the temps reaching mid 80's by baling day. Monday night we had the slightest of rain showers, So slight it was not wet under the trees. However, it was enough to affect the hay. Today we baled but noticed a lot of the beautiful green color was missing. We made the decision to only bale enough square bales to fill the barn since we will not market this hay for horses. We happened to have a fellow baling round bales on our road and he was happy to finish the field for us. We put up 344 square bales and he round baled another 14. We kept six and a person with cows was thrilled to take the rest off our hands. Good hay but not great hay. Hubby prides himself on his premium horse hay but once again Mother Nature let us know we are not in control! 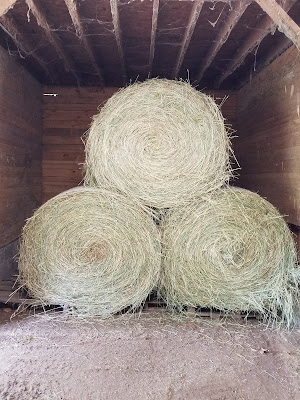 And that is just another day of life on the homestead.

Posted by life on the homestead at 2:46 PM No comments:

Several weeks ago hubby said he wanted Guineas. My only question was WHY? I like Guineas he said. Don't you? Nope I don't. Well I'd like to have some. We used to have them. What happened to them. My answer. We ate them. They were loud, they were obnoxious, they were DUMB. And we ate them and they were delicious.
The next week he happened to ride with me to the feed store. Did you order my guineas he asked in front of the owner. No. Owner said we have them coming you want some? Not really. Hubby pipes up. Can't a man have some guineas for Father's Day? Seriously?? He pulled the Father's Day card on me?? Owner scribbled something down. Three weeks ago the feed store called and said Hubby's birds were here. Sigh. I went to pick them up and they had ordered me 12. TWELVE! 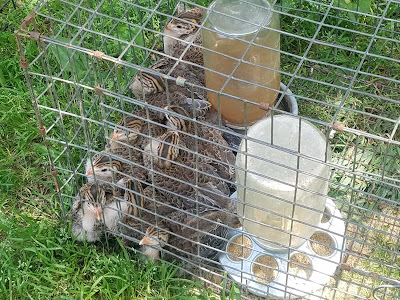 Hubby is so proud of his birds. Right now they are living in a cage inside a pen and being moved indoors at night. He thinks they are awesome. At this age they are kind of cute but don't think for a minute I don't have those recipe cards close by!

Posted by life on the homestead at 1:21 PM No comments:

I'm still working on freezer space for the chickens.
Today I rendered lard. I have done it several different ways and tried a new one this time. I did it stove top in cast iron and heavy stainless steel pots. This is the way I'll be doing it from now on. It was the quickest and produced the most beautiful end product. I cut up the slightly frozen leaf lard fat into small cubes and put it over very low heat. Some people add water, I did not. After it started to melt I adjusted to temp to keep at a very low simmer. 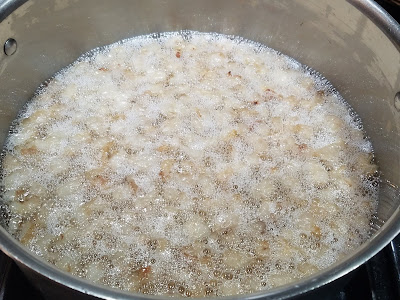 I let it simmer until most of the fat was melted out, stirring occasionally. The picture below is about halfway through the process. 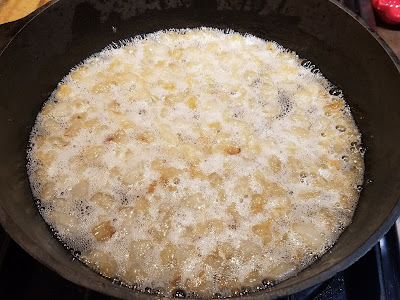 It took about 2 hours for it to render. I didn't wait for the cracklings to get totally crispy. I strained it and put it in hot jars with hot used lids and rings. They all sealed and are just lovely! Though it should be shelf stable I will be keeping it in the fridge because my pantry can get a little warm during the summer. Today's yield was 4 pints. I will let you know how the biscuits turn out! 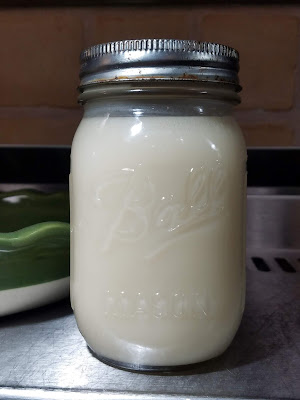 Posted by life on the homestead at 8:48 AM No comments: