Had to have my canning fix for the week! Today I canned boneless chicken breast. So easy to do. I cubed the chicken, raw packed into jars, added a smidge of salt and processed 75 minutes, Done! 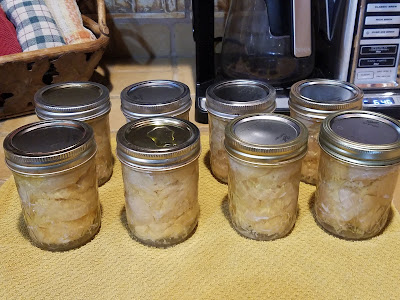 Ready for the pantry and perfect for a casserole or quick chicken salad.
Posted by life on the homestead at 11:58 AM No comments:

Pouring A Little Bit of Soap

I was recently asked to make some special order soaps. One of the stores that carries my soap has been mixing their own special essential oil blends. One is called Hippie Farmer and the other is called The Farmer's Wife. They both smell divine. While I was soaping I went ahead made a round of Russian Tea the always popular scent, especially around the holidays. 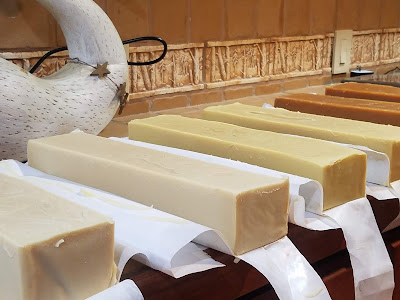 Posted by life on the homestead at 11:54 AM No comments:

We were wakened during the night by a very strange sound. RAIN! It was raining. A slow soaking rain. It rained most of the night. The fields looked settled, the world looks clean and happy. Blessings abound on the homestead! We should see some green in the fields very soon.
Posted by life on the homestead at 11:05 AM No comments: 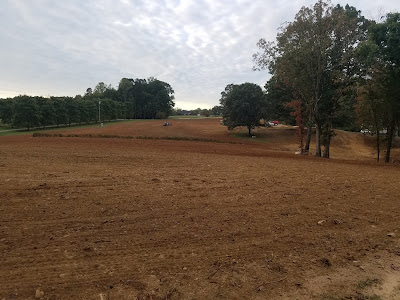 There is finally some rain in the forecast. It is the first really good chance we have had in a long time. The boys headed out at daylight to get the fields ready to be planted.They had picked up supplies yesterday. The trailers were loaded down with seed, fertilizer, lime and straw. I had strict instructions to head up to the field when I had finished morning chores. Chickens out, baby goats fed, cow milked, poop scooped and milked strained and in the fridge I took the new Gator and wandered up. My job was to follow around with materials and help fill the hopper on the tractors and pick up any rocks that turned up. We ran low on seed so I had to go back to the feed store for another 100 pounds. After all the fields were planted we had to blow straw on a sloped area so it would hopefully not wash too much. So my next job was to drive the truck while the boys loaded the blower and blew the straw and try not to toss them off the trailer. I done good! No injuries to report! It was dusk when we finished.

It had been discussed repeatedly on what to plant. Finally we decided to sow two fields in winter rye grass, the garden in rye grain and the new pasture in fescue. We are ready for rain.

Posted by life on the homestead at 10:39 AM No comments:

A couple of days ago I noticed Violet had some swelling under her jaw. Her skin was loose and filled with some fluid. I would say it looked kind of like bottle jaw that I have seen in goats. I called my vet and told the office person all my details. That was at 3. She said she would have him call me back. I carried my phone around all day. I finally had to plug it up to charge but still stayed close. Finally at 8, I needed to feed one last dog. In the 2 minutes I was gone he called. He left me a message saying how he was sure the calf could not have bottle jaw. The office person got the whole story mixed up. Sigh. And of course, I couldn't call him back. Yesterday I called first thing and got to speak with him.  He proceeded to scare me half to death. Usually fluid under the jaw is associated with heart problems. If so, she was going to die. Or maybe she has swallowed a piece of metal and it was in her heart, if so, she was going to die. He did suggest I worm her which I did. I finally said can you just please come look at her!? He said it would be Friday. (today). He got here around lunch. By this time a lot of the swelling was gone. Now remember she was not supposed to be bred so I was not feeding her like I would a pregnant cow. I had remembered the day I brought her down to the barn she wore out the mineral lick and drank a ton of water. I asked him if possibly this was the cause. He took her temp and listened to her heart and all seemed to be normal. He said he had never seen it before but the fluid could have been from her overindulgence on the lick. Of course not. Only here on the homestead!
He then asked what I was going to do with the bull calf. I said I didn't know and had halfway thought about keeping him. I got a quick "Don't do that". I know Jersey bulls can be nasty I just didn't know how nasty. I've known my vet for almost 30 years. He was genuinely concerned for me and told a couple of awful stories of people he had known that were killed by a Jersey bull. Sooooo, Hank will be castrated in the near future and will be headed off to freezer camp down the road.
Posted by life on the homestead at 11:25 AM No comments:

Barn Day and A HUGE Surprise!

Today was an absolutely beautiful Fall day. The first we have had. Our chore for the day was to clean the barn out and get things ready for winter. The hall was scraped out. stalls cleaned, fresh shavings put down and gates replaced. 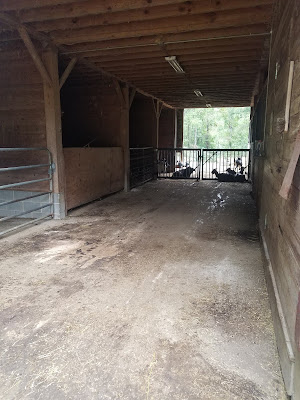 About lunch time Hubby had walked to another shed to get some tools. I heard him yell for me to come quick that something was going on with Violet my other cow. I ran to her shed to find out she was in labor! We had no idea she was even bred. Today was almost exactly 9 months to the day we picked the cows up! She must have bred a day or two before that. She blessed us with a little girl. Wow. Just wow. I had gone from 2 cows to a full fledged dairy herd in 1 month! Her name? 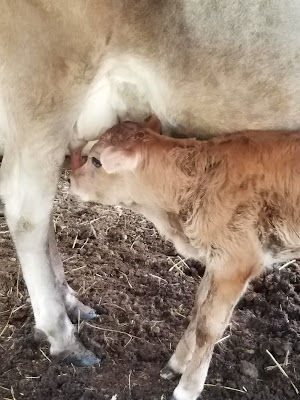 My birthday was a couple of weeks ago. Hubby came home and said he had to order my gift. I really didn't think much of it until he pulled up yesterday with this! A brand new Gator. The one I have been using on the homestead is over 20 years old. 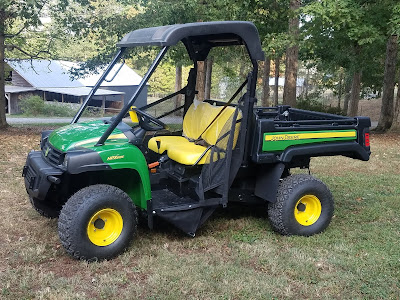 This morning I was loading up my milking supplies and hopped on my old one. Hubby held up his hands and asked why I wasn't on my new ride. I said all my stuff was in the old one. By the time I had finished straining my milk he had transferred everything over and had hidden the old one in his shop! Later today my daughter in law said she had jokingly told my son hubby would have to disconnect something on the old one so I would drive the new. Haha. She was pretty close! I am such a creature of habit. I still mow grass with my ford mower that's 27 years old even though we have a brand new zero turn. Yes. Old habits die hard for me!
Posted by life on the homestead at 10:19 AM No comments:

The fridge is brimming with milk and today's chore was to do something with it. First I skimmed a couple of gallons and made some fresh butter. I'll use that later this week to make some cookies. 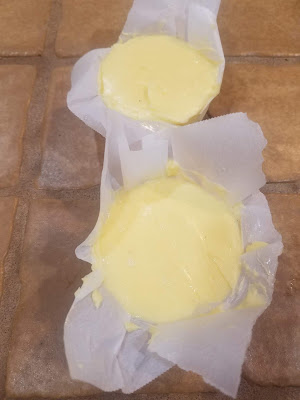 Then I made a quick cheater's mozzarella. It is too easy! I heat 1 quart of milk to 86* and add 1/4 cup of white vinegar. 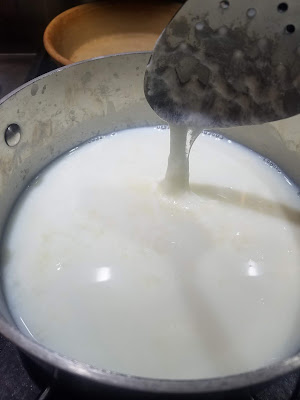 It curdles right away. 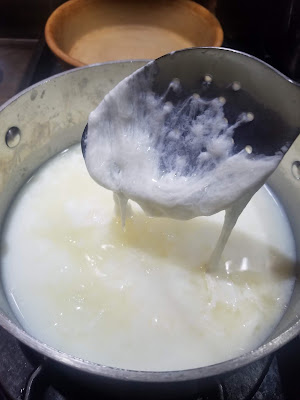 I keep stirring until it forms a blob. 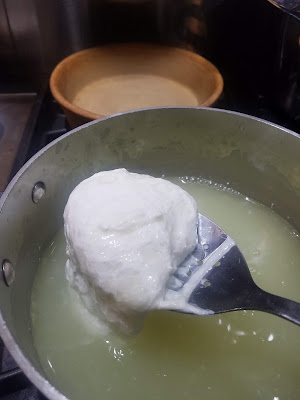 I then work it for a couple of minutes in the hot whey and presto.  It literally only takes about 5 minutes. I made 4 rounds. 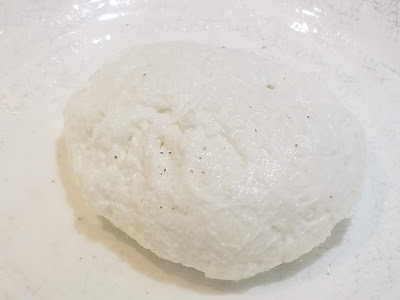 I used that on our veggie pizzas tonight. Yum! 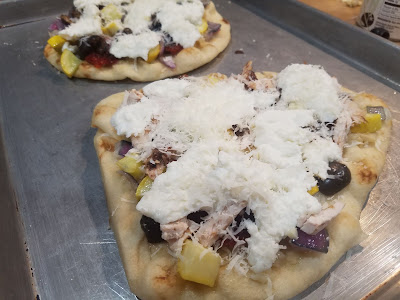 Posted by life on the homestead at 10:06 AM No comments: