If there were one thing that I hated doing more than disbudding and tagging goats it would have to be pruning. Call me crazy, but I find pruning to be almost barbaric. I mean really, it not like it is a DEAD branch. And so it was, that pruning the grape vines was on my "to do" list today. I put it off until 4:30 and had run out of excuses. Pruners in my pocket I advance toward the vines. Since this is just our second year with our grapes, I did some research and looked at pictures. Obviously, my grapes did not read the manual and in no way even remotely resembled the pictures of what the "before" should look like. This is no exaggeration when I say I took a shaky breath and began cutting. Snip, snip, snip. As the trimmings began to pile up, my self confidence was plunging. Too much? Not enough? Am I killing them??? Yikes!
My son walked up and asked why I was cutting so much off the vines. I almost fainted. Finally my mission was accomplished and I declared to the vines- this hurt me a lot more than you.
Luke rolled his eyes.
Now on to a happier note..the next to the last cashmere kidded today. I felt quite certain that if she did not give birth today she m 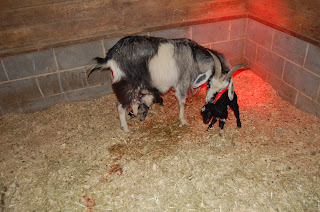 ay possibly explode and at 5:30 I discovered a set of brand new twins. Both were soaking wet and just minutes old. I finally have one that looks like its mom. Since I have been trying to get that color for quite a while I was really excited.I didn't check the sex because they were so new but fingers crossed it is a girl! 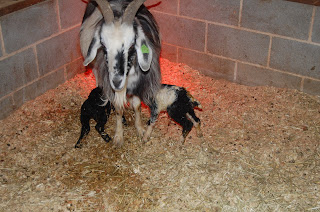 Posted by life on the homestead at 6:49 AM