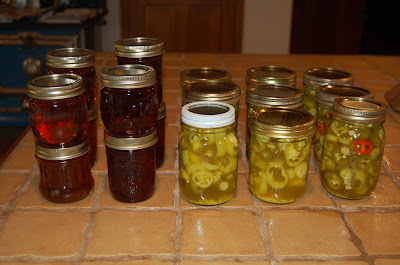 Yesterday's garden pick yielded another large basket of peppers, so I spent the afternoon pickling most of them and making some pepper jelly. I had an assortment of jalapenos, hot and mild banana peppers and instead of trying to separate all of them I just sliced and tossed them all together. I also made some pepper jelly using cranberry juice as the base. It is really delicious (and pretty!) especially when served with our fromage goat cheese and crackers. The first batch was not spicy enough so I tried again. The second one was a little better but I am going to try one more time for a really spicy batch!
Today's list of chores include canning the green beans I picked yesterday, picking up hay and pickling the ever producing okra~again! Better get busy.
Posted by life on the homestead at 6:08 AM