I Heard The Rumblings

One would think the boys were a bit strange. They have watched 3 weather stations and checked the Internet numerous times. Yep, it's hay season. For the next few weeks, this is my life. Mow? Don't mow. Chance of rain. Percentage???? 10, 20, 30? Mow? Don't mow.
Trucks were in and out before daylight. I heard loud voices and the banging of metal. Equipment was being prepped, hitched up and ready to go.
Today the first of the fields were dropped, probably about half. 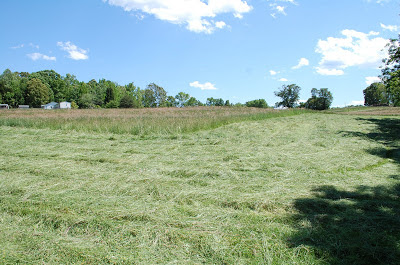 No chance of rain until Friday. Of course, this would be Luke's college orientation this Thursday in Wilmington. After chores are finished late Wednesday eve, Luke, his girlfriend and I will head down and as soon as orientation is done on Thursday, we will driving back in. We will be baling Friday so it looks to be a quick turn around trip.

Posted by life on the homestead at 4:04 AM