What IS That Noise?

It felt good to be back into our routine this morning! As usual, while having coffee, I planned this weeks menus and my to do list for the week. That finished, I headed to the barn to milk and feed the babies. Doug was working on his grilling station project. While feeding the babies I kept hearing a strange noise. I looked around and the air was filled with bees. SWARM! All chores were momentarily dropped and we hurried to grab hive boxes and capture the bees. We have decided that having some low growing bushes near the hives is a good thing because the tend to land there while deciding where they want to go. Once they were all clustered we shook them in a hive box and placed the lid on. Later tonight, when they are all in we will move them to a location near the garden. 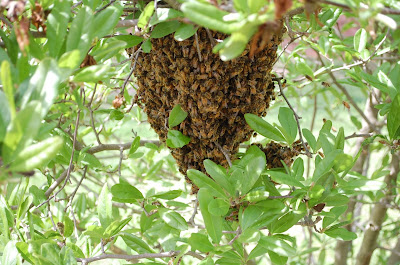 Posted by life on the homestead at 5:49 AM