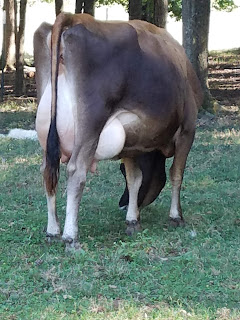 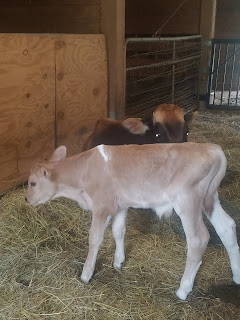 I had to leave early this morning to run some errands. I got a call from my daughter-in-law saying she and granddaughter were admiring a beautiful new calf. I couldn't wait to get home and see what we had. When I did get there around 10:30 I knew we had a problem. Vinca did not want to get up and looked like a skeleton. I immediately went in and tried to get her up. I finally coerced her to move a bit and drink a little water. Then I called the vet. He arrived about an hour later. We managed to get her back up and tied off to a tree. He ran a tube to her stomach with a funnel on the end and with the help of sis we literally dumped 20-30 gallons of water in her. Once we got her somewhat hydrated he finished checking her out. He was very concerned her stomach was trying to turn and if that happened it would be emergency surgery or we would loose her. He gave her some a couple of shots and wanted to get her in the barn just in case of surgery and also wanted to see if she would eat. By this time Mom had arrived and volunteered to go pick up some alfalfa hay and feed. Another friend happened to stop by and with her help, my daughter-in-law and myself we got her herded to the barn. Vinca drank some more water and munched on some hay. Later she ate some feed. I was still worried sick by she was at least headed in the right direction and not looking any worse. I checked her every 30 minutes or so until late night.
We think she had a really hard delivery as the calf, a bull, was huge. It was a really hot day and the water tubs were on the other side of the pasture and she just didn't bother to go get a drink.
Sending out many thanks to all that helped and made sure she was ok. Sometimes it takes a village!

Posted by life on the homestead at 7:55 AM