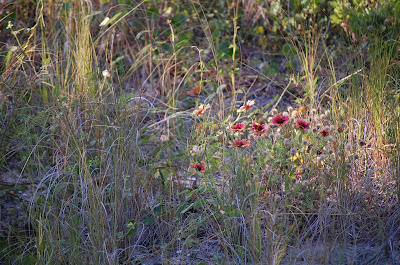 Anyone that has a farm and numerous animals knows that vacations are all but a figment of one's imagination. However, every Fall we try to go to the beach so the guys can fish. Personally, I detest the beach and am usually drug kicking and screaming all the way. Maybe it is not JUST the beach, it could be the preparation of getting there. Our vacations are usually limited to day trips or at the most, 24 hours-- feed, milk, leave, spend the night, come home, feed, milk...
So preparations began weeks ago, with me lining up a farm sitter and adjusting work & baking schedules. This was also a poignant time as this was the same weekend and same house we went to last year with my best friend that was dying of cancer. More on that later..
So back to the preparations. I spent last Sunday and Monday checking over all the critters in hopes no one would decide to croak on the poor farm sitter's watch. I trimmed feet and dewormed those that needed it. I also moved extra water tubs to each pasture and stocked up on feed. I made sure there was plenty of hay out of the loft so she would not have to battle the steps and condensed some animals to make less pastures to tend. I also packed up groceries. We don't eat out down there, instead choosing to purchase local fresh seafood and enjoying family time as we prepare meals.
Tuesday- I baked and worked a long day. That evening, as I was packing, I kept hearing a noise in the bedroom wall (I had heard it for last few days). I kept telling my husband about it and he would kind of nod, but I felt like maybe he thought I was nuts. That night it seemed louder. I called him in the room, got a chair and said, "See? it is right there!" as I said there, I poked it with my finger which went into the ceiling and out boiled yellow jackets. Holy cow! We practically knocked each other down as we tried to escape. He put on his bee suit, taped up hole and we gathered fly swatters for a bee killing fest. All escapees killed, we finally got to bed.
Wednesday- I got up before the chickens to bake bread to deliver before we left. While it cooled I headed to the barn and filled all the water buckets, milked the goats made sure everyone was well . I put several bales of hay out in the woods for extra food. I filled the chicken feeders to the brim and added extra water pans for them too. Gathered what eggs had been laid, fed the dogs and headed for the house. I came in to find my husband once again in his bee suit. It seems the tape we used did not hold and our bedroom was full of really ticked bees again. He wouldn't let me in the room until some had been disposed of. I delivered bread. Back home, most of the bees were dead, several layers of duck tape were now affixed to the ceiling and I was able to finish packing, get a shower and get ready to go. We hit the road around 1:30.
Thursday- I waited until about mid morning to call my friend who was going to stay at the farm and take care of the animals. She asked if we were almost ready to leave. I just abo

ut died. We are here. She just about died. It seems we some how crossed up dates, but bless her she rearranged all of her plans and headed to the farm. I explained to the bee situation and all was well. Later that day I got a call from my boss and she informed me that the 18 laying hens I ordered were here. They were supposed to be here NEXT week! Geezz, I should just go home. I made what I thought were arrangements for them to stay at the farmer's barn until I got back.
Friday- We hiked the Sugarloaf Dune in the Carolina Beach state park. Half way through the hike we met up with many park rangers and sheriff deputies. Had we seen anyone on the trail? No, we had not

, so much for a relaxing hike. We walked a little faster.
Saturday- A message from my boss on my cell phone. The people could not keep the chickens, she was headed to get them. She wanted to know if they needed lights. Being that they were 20 weeks old she would not need lights, but a truck to pick them up. Good grief! When I got back with her, she had already figured that out and God bless her had taken care of that. I promised I would be there ASAP Sunday.
Sunday- We headed out early and arrived home safe and sound. We unloaded the truck, gathered cages and went to pick up the chickens. After tending the animals and finishing chores we ordered a pizza and collapsed. This vacationing stuff is exhausting and I personally find them a bit overrated! 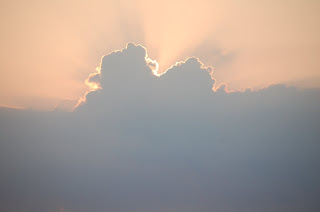 As I said this was a poignant weekend. A year ago this week we made this same trip down with my best friend, Sharon. She had been diagnosed the previous Christmas with cancer. We spent most of the next few months together, cramming a lot of life into the time we had left. We went to the beach to celebrate her birthday. We laughed until we cried and ate wonderful meals and had a grand time. That Sunday, we headed home. I decided not to call and check on her since I knew she was really tired. Monday morning at 7 a.m. her husband called to tell me she passed away in her sleep. She asked to be cremated and taken to all of her favorite places. Her family has traveled to Germany and New York. We traveled to the mountains this summer to say good by at my parents' house, a place where she and I spent a good deal of time. This past year has been an emotional one. It only seemed right to scatter a few of her ashes at the place where we spent our last wonderful few days together. Saturday morning, I awoke to the sun starting to rise over the ocean. It was a glorious sunrise. I hurried down to the beach. I scattered her ashes by the walkway, near a bush and said goodbye for the last time. The sun ducked behind a cloud and then burst forth in the most amazing light I have ever seen. For the first time in a year I felt a calmness and peace in my heart. Later that day my husband and I gathered shells and placed them where I had scattered her ashes. It was a special day.
Posted by life on the homestead at 5:24 AM